When it comes to fun soccer drills we need to make sure that we are developing the players.  You may see a coach who makes the practice fun, but they are not improving or learning.  On the contrary the coaching might be good, but most kids will tell you they want some encouragement.  Another important element you want in regards to fun soccer drills is for there to be competition. If the coach isn’t disrespectful and then the kids are learning and improving they will enjoy themselves.  Below you’ll find different ways to make training/practice fun in team, small group and 1:1 settings – from advanced to beginners. Listed below in this article are 5 drills younger players really enjoy. 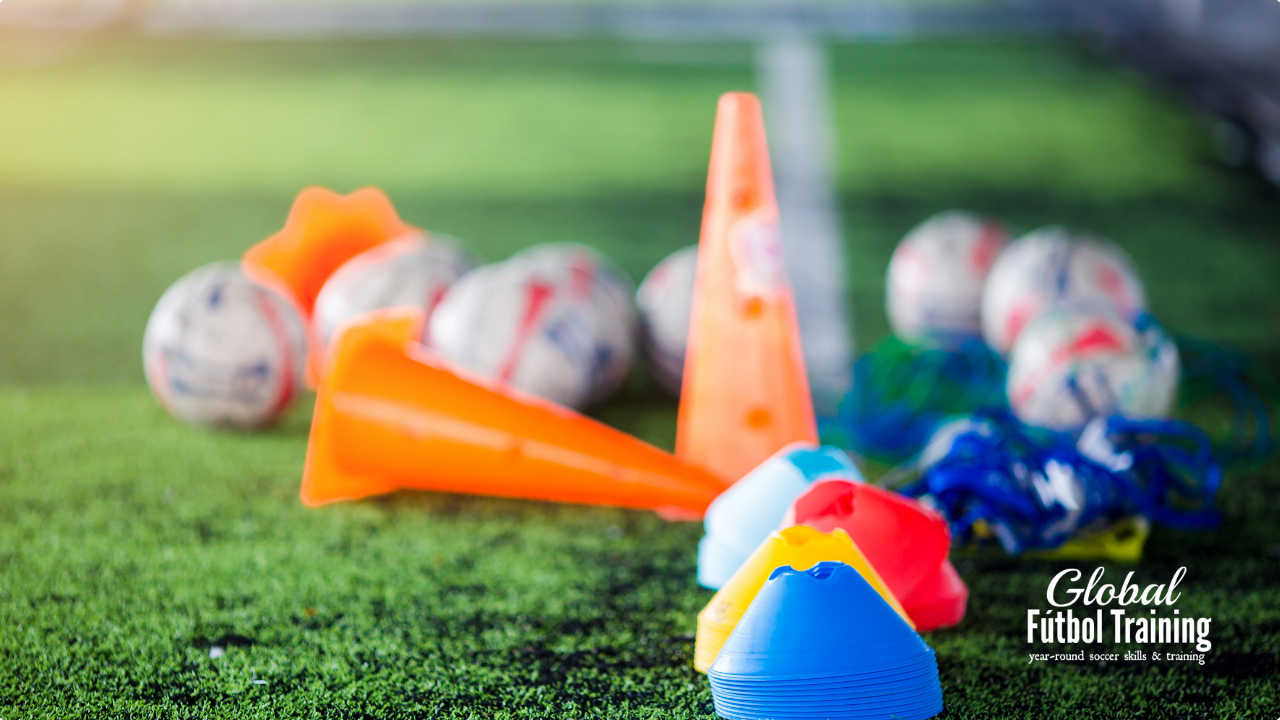 I’ll never forget a few Summers ago I was doing a morning private lesson.  Next to us was a big Summer camp…  What I saw and heard was unbelievable.  The camp coach asked the young players (ages 6-7) if they knew what sound a cat and dog make.  Then I see all of the kids dribbling around in a grid barking and meowing…

Even if the kids were 5 years old that’s just silly and a way to take up time.

There are training exercises kids can do without making animal sounds at a soccer camp.

Listed below are 5 fun games for younger kids.  Feel free to adapt them how you want.  For older kids there are more challenging ideas that they like and benefit from.

For ages 5-6 teach them how to pass short with a partner, dribble (having their own ball), goal scoring, scrimmage.  Ages 7-8 can do the same as ages 5-6 along with rondos (6v2, 8v2, 12v3) giving the larger number a better chance to be successful – boosting confidence on the ball, possession or scrimmage, Last but not least is crossing and finishing.

Ages 9-10 can do all the same as the younger but add in volleys with the inside and laces. Juggle is another idea.  To challenge them see who can juggle the most or have them all start at the goal line or sideline and see who can juggle the furthest without dropping the ball.  If they drop the ball they start over.  This is more competition that they love.  Of course most players aren’t great at juggling, but we all can’t be great at everything right away.  This is a great time to be reminded that we have to practice on our own at home.

Transition games like 4v4v4 or 5v5v5 depending on your numbers (3 teams – where if one team loses the ball they are in the middle and the other two teams keep the ball from them).  This transition game changes whos in the middle every 5 seconds or so because the players lose the ball a lot.  It teaches them to be ready to move from offense to defense quickly and to communicate on defenses.  It’s confusing when it’s new for the players so be patient.

For ages 11-13 kids need to do all the same as the younger kids because basic fundamentals are vital.  Even the pro players do the “basics”.   It’s important that coaches remind the players about mindset and sports maturity at this point.  Middle schoolers and high schoolers think they know more than they do.

Kids are very smart, but just don’t have much experience yet.  I remind this age group every other week that they need to keep wanting to do the simple things perfectly.   Skills to add in for this age group can be things like half volleys, outside of the foot volleys, thigh foot, chest foot, headers, proper ball striking, movement off the ball. Using a partner here are 8 great stationary skills kids need to continue.

When it comes to the high school age we have to talk about the level.  Are these kids who are varsity starters or players who are trying to make the team.  There’s a difference on what they need to work on.  If they are college recruits they can and should do what I posted above for the middle schoolers, but you can add in more advanced skills.  Bending balls, chipping, certain aerial control, volleys on goals from distance or side volleys from the cross.

When it comes to team training the hardest thing coaches deal with is the large number of players.  The key to development is eliminating lines!

Long lines mean wasted time, money and development.  You can split the team into stations depending on what you’re working on.

If it’s ball control have each player with a ball and do competitions to see who gets the most touches in 20 seconds.

In this blog article you’ll see a common theme in these different practice settings. Whether it’s a team or private skills training, the main focus is the same.  Let them be somewhat successful in the sessions and let there be competition.

Humans love competition, which means they are going to have fun without the session being corny.

Here’s a fun 1v1 drill via video where kids try to knock the balls off the cones.  Set a ball on 3 cones. Once your ball goes out of the grid it’s over.  You get 1 point for every ball that you knock off.

Some people though are so competitive that you might have to adjust your drills – so that they don’t get too upset.  If the kids get frustrated from not winning, this is a great time to teach character and sports maturity.  Kids need to know how to think, how to win and lose.

In a 1:1 private lesson you can do a number of fun soccer drills.

Two things you want to focus on is first being positive, especially after they make mistakes.

The second thing to focus on is letting them be somewhat successful in the drills.  Example:  If the drill is so hard that they can’t make any of the shots or passes, they probably won’t like it.

If you’re doing a shooting exercise, have the player close to the goal (6 – 12 yards away from the goal) so that they score more.

The best part about being 6-12 yards away is that this is where most goals are scored, especially in college, pro or high level high school soccer.

Sure there are kids ages 8-10 who can shoot from distance but they score mainly because of the goalie being short from their age.  So let them know these stats so that they don’t think they are too close to the goal.

Knowing where most goals are scored in soccer is vital and let’s them know where to cross the ball and make runs.

For advanced players we need to make it more challenging.  Instead of just scoring the goal, try to hit the side netting or place a cone/small target in the corners of the goal to hit.

Teaching players how to finish is important and most kids, especially boys just want to shoot with power.  Kids need to know the difference from shooting and finishing. 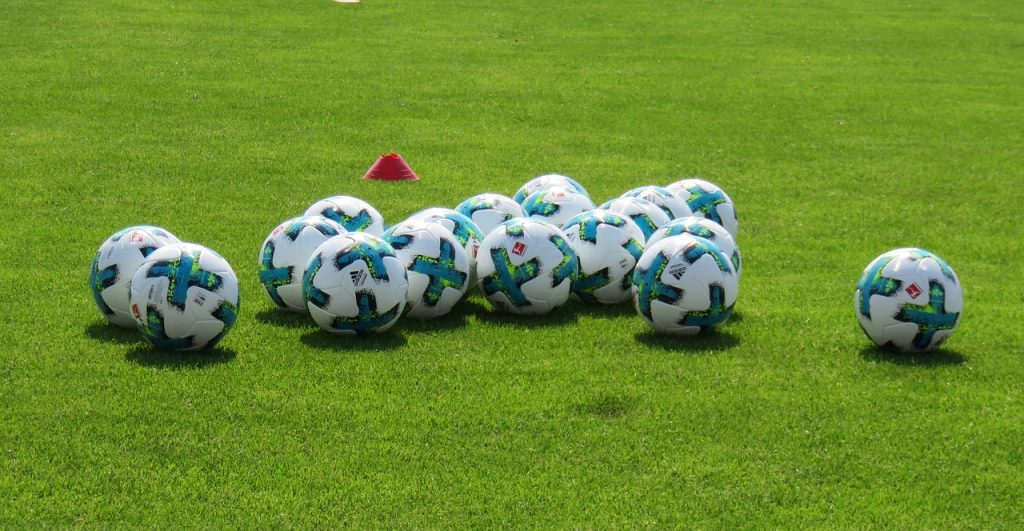 Ending practice with a purpose

There are 2 fun soccer drills that all ages love.  One is called “Head/Catch” and the other is “Chipper Jones” AKA ‘Nothing But Net’ which you can do with 1 player or a team of players.

Both of these games bring a smile to even the most shy or serious kids.  I’ve trained kids who never spoke or smiled the whole practice because of their personality, but once we play these 2 games the smile came out.

For ‘Head/Catch’ if there’s a team you can get them in a big circle around you (the coach).  One at a time toss underhand to their head and while the ball is in the air say either “head” or “catch”.  The challenge is the player does the opposite.  If they get it right they stay in the game, if they don’t get it right they are out.  You can also give them an “extra life” which they like.

‘Chipper Jones’ AKA ‘Nothing But Net’ is a shooting competition.  If you’re a baseball person you’ll recognize the name.  One day I called it Chipper Jones just messing around and it stuck…  Anyway everyone has a ball and shoots one at a time from the 6 yard box.  If you make it you make it to the next round, if you miss you’re out.  This continues – moving back 6 yards each round.  The last person to make it wins.

The purpose of this game is to end off the practice with something fun.  A player could have had a bad practice, but ending off with head/catch let’s them forget about the bad practice they had. 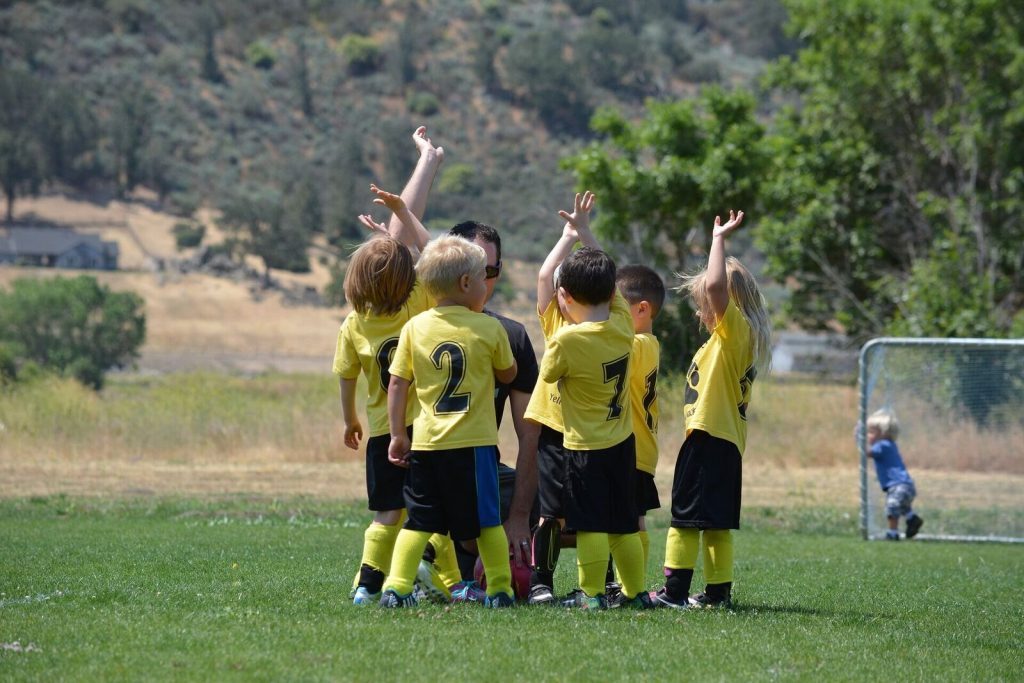 For younger players the key is for them to be encouraged, have fun and learn the basic skills.  This gives them a better chance to continue playing when they are older.

A fun tool that helps boost confidence and want to continue practicing on their own is the soccer tee.  The soccer tee is designed to help younger kids be engaged.  This tool gives them a path to help them phase out and learn to kick the ball without the tee.

One thing about younger players is they don’t like to be corrected over and over.  They don’t yet understand that’s how sports is going to be.

Being corrected is how we learn, but younger soccer players ages 4-6 or even up to age 9 they have a hard time with this and get discouraged.  What the soccer tee founders have learned is the kids will stay out and kick the ball for a longer period of time when they don’t have a coach or parent telling them what they did wrong over and over.  This is what I like about the tool, is it gets the kids to go out and just practice on their own.