Let’s talk about goal side defending…  Soccer [Futbol] games every weekend for many! Especially if you have 2-3 kids who all play soccer! Parents with 3+ kids who all play soccer – wow.  Recently I went to go watch some of my students play a game for their club. It was a great time because, I got to support 7 players who do technical training with me. One thing I noticed was how they positioned themselves on defense. Defending in soccer requires many things, one of which is staying goal side of your “man” [mark].  Note: This post contains some affiliate links for your convenience. Click here to read my full disclosure policy.

Importance of being goal side defending

The key to being ‘goal side’ is so that you make it harder for the opponent to score a goal.

Being goal side, at the right time is going to be one of the most important things for a soccer player. You just don’t see to many goals scored when the defender stays goal side.

If you are not goal side then you would allow the player you’re marking to get an easy goal.

Even a bad defender is hard to score on when they are positioned correctly. The presence of a defender alone will make an forward (attacking player) nervous. 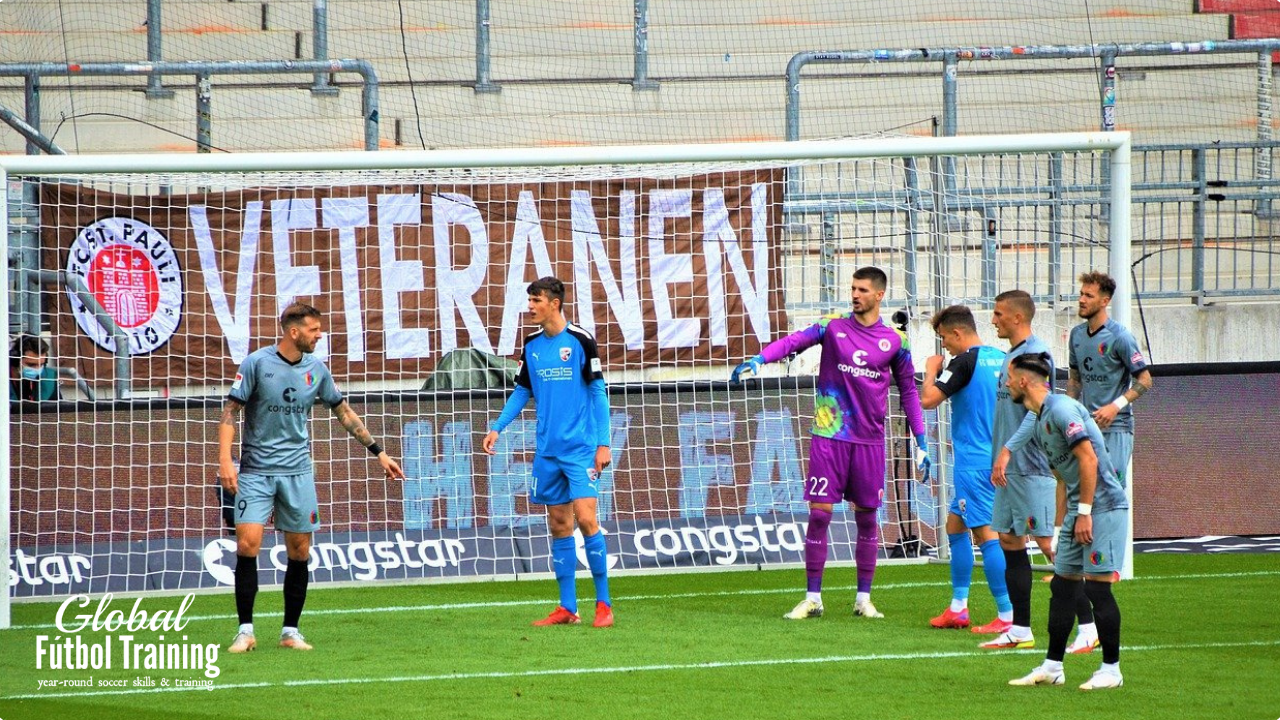 Explaining goal side defending in soccer

Positioning yourself between the goal you are defending and the player you are marking. This is something that academy players, ages 9 down to rec players usually have a hard time getting. Just the other day I was watching a U-9 girls game and the defenders had a hard time knowing where to be.

High school players might know to get goal side, but are they close enough to the attacker?

The defender needs to stay within reach of the attacking player for 2 main reasons.

1) So they know exactly where the player is and

2) so that if the attacking player does get the ball, they don’t have enough space to shoot on goal.

Often times in a club or high school soccer match you will hear the coach or player yell out “Get goal side”.

It’s really easy for players to end up doing what we call as “Ball watching” which means they are watching the ball instead of looking around to see where people are. You need to position yourself well to be good at defending in soccer.

Defending the cross or corner kick

Once the ball is played [passed] out wide and you are having to stay in the middle to mark up your man, make sure that you get your body turned around.

This way you can see the defender and the ball all at once.

The only time it will be near impossible is when you are running back to defend at full speed. Once you feel you can turn and back pedal or get into defensive stance [knees bent].

Defending a corner kick you see below the BLUE dots [defenders] are “goal side” of the RED dots [attacking players].

Must know tips for defending a breakaway in soccer

First thing to know with defending a breakaway is if you are the defender who is chasing you need to know you can’t foul from behind. This will result in a red card almost every time.

Now if you fouled from the back in a different part of the field it’s probably just a yellow card. But if you are the last defender and you foul from behind then good luck staying in the game.

So what you want to do is get to the side of the player on the breakaway and try to poke or take the ball away.

Whatever you can do to not allow the player to shoot the ball or score a goal.

If you can’t catch up then at least try to get a light hand or tug on their jersey. I by no means am teaching dirty play, but remember pulling or pushing a player lightly is not a foul.

You have to be aggressive and if you can just get the player off balance it will mess most players up. You have to know when and how to do this.

Right as the player is about to plant or shoot just knock them off balance, just not enough to make them fall or it’s obvious. Just enough to let them feel it, but the ref can’t really see it.

The physical challenge of having to keep up with a fast, strong & skillful player is one of the hardest thing in soccer.

Then there is then having to keep up with them when they don’t have the ball.  Hardest thing for even the best defenders is, having to keep sight of your mark who is running without the ball towards the goal, while the ball is about to be crossed in from out wide.

The thing that usually cost players the game or a goal is that they got into position too late, or they just weren’t close enough to their mark.

You are going to be at lots of soccer games in your future, so make sure that you are goal side when marking up.

It doesn’t matter if you play more offense, remember attacking player are the first line of defense.

Defenders must know that their main role on the field is to defend. Even if you have to kick every ball long down the field and you never complete a pass.

As a defender your job is to not allow goals scored against your team. So defend, meaning mark up tight and put pressure on the ball ALL game long.

Don’t dive in, don’t foul in the box, don’t foul if you are the last defender. These are all different topics and blog post. But rule #1 for a defender is DEFEND. 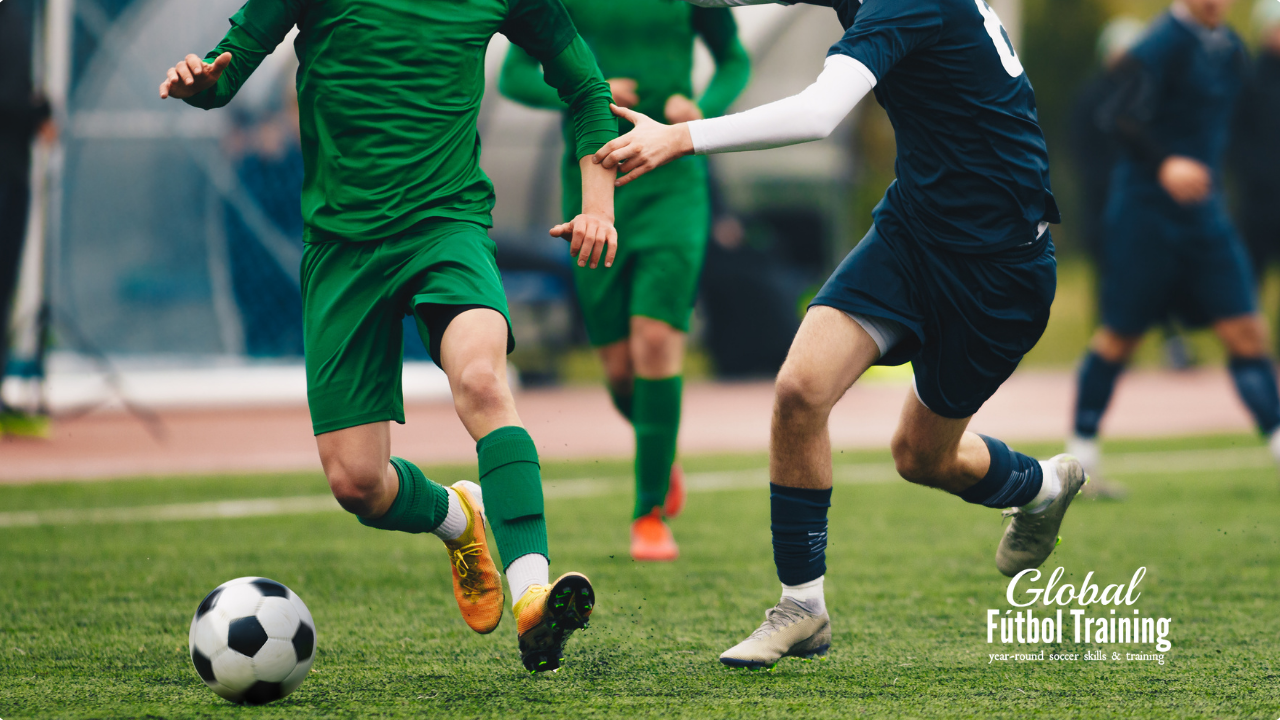 Stay in arms reach when goal side defending

In some parts of the field you can let the “man” your marking stay 10 yards away.

Inside the 18 yard box you have to get within arms reach.  Make sure that as a defender to stay goal side the whole game.

Most goals that are scored are because someone on defense was being lazy or just not being aware (switched on).

All it takes is for the defender to let their mark get 5 yards away, and then you see a perfect cross come over head for a goal against.

Everybody knows a good defense is just as important as a good offense.

The most under appreciated players are the defenders, only because they don’t score as much.

One of the best things about being a defender is you get to play more minutes. The reason is because there are only a select group of people who actually can defend.

Even some of the most skilled players will tell you they freeze up when having to get the ball out of the back. Meaning when they have the ball in the back third of the field or while playing defense, they are not as comfortable when they have it up top.

A Forwards role defending in soccer

Forwards / Strikers are the first line of defense in soccer.

For a good defensive team there needs to be a game plan from front to back!

The goalkeeper and defenders need to be good yes, but the attacking players need to be defending well too. Putting pressure and forcing the other team where to go is the responsibilities for a forward defending in soccer.

There needs to be a supportive role, when it comes to defending well.

Midfielders and the forwards don’t have to be great defenders, but they need to act like it. This means they need to put pressure on the opposing players, as this causes turnovers.

When the first or second lines of defense are organized and working hard, there is less chance of the other team getting shots on goal.

Out of all the players on the field the defenders usually have the least amount of skill.  Even in the pros, defenders lack the skill compared to midfielders and forwards.  If you want to really set yourself apart from other defenders, get my online ball control courses.

I promise you will love soccer even more.  You can get ‘The Advanced’ course, which to me is the most important and is what every coach (at any level) would want you to have.

If you are already technically clean and want to boost your skill and love for the ball, then get ‘The Magic’ course.

In my decade + years of teaching even some of the best high school and college players, this is what gives 99% of them a big boost of skill, confidence and more love for the ball.