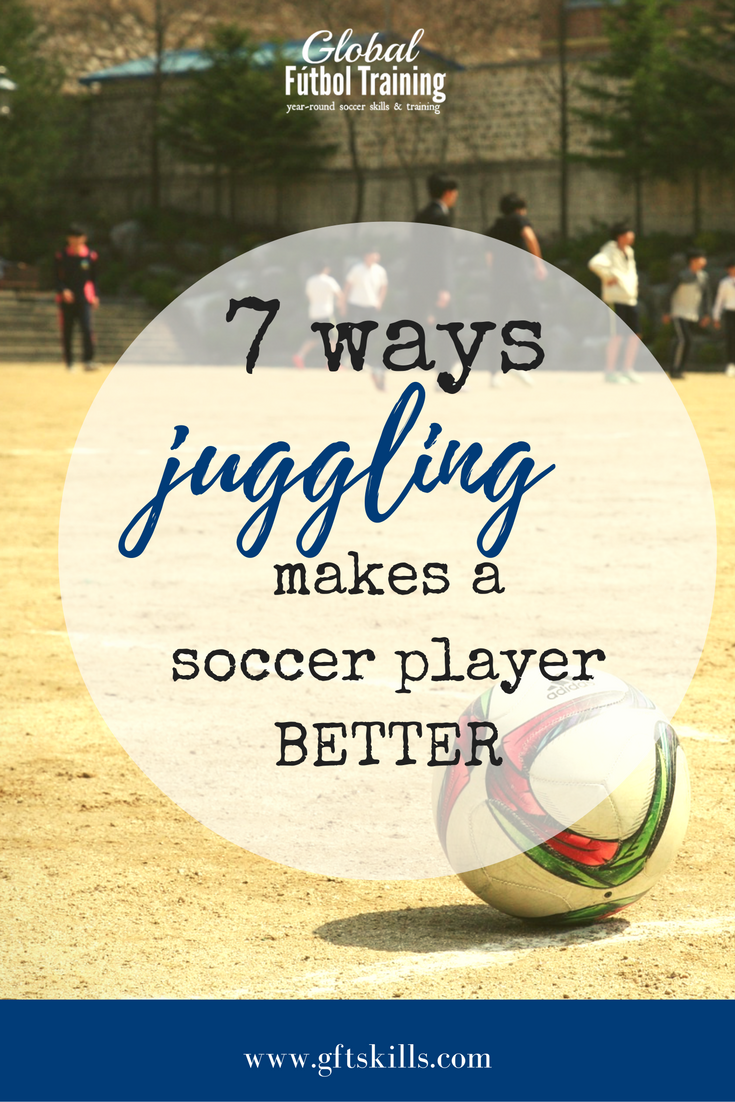 Soccer players and parents sometimes ask me how juggling helps in a game.  It’s such a popular question that I’ve listed 7 ways juggling makes a soccer player better. The ability to juggle will help your confidence, passing and first touch. During youth games, the ball is in the air a lot.  Players who can juggle will most likely feel confident to control it out of the air. Often in futbol, the first touch has to be from a bouncing ball or coming from a long ball or punt.  I recommend players who are good at juggling to start practicing many different ways. Most just know 1 way trying to break a record.  For players who are not good at juggling, be patient and take a look at the age breakdown below.  Ages 6-10 have a hard time juggling, but those that practice at home are usually better at keeping the ball up.

Juggling doesn’t define you as a player

You probably notice how some players might be the best on the team, but not necessarily great jugglers.   You’ll also notice how not all players who can juggle are good players in the game.  You can be technically good, but not be a “game player”.

Some of the faster or bigger players have a harder time with juggling.  Others are very athletic but clumsy at the same time due to growing at different rates. So remember to be patient and keep practicing.

Juggling comes naturally for only a few

Players who can juggle 50+ times by 10 years old are usually players who have early high desire to improve. It means they spent a lot of time practicing on their own.

Juggling is definitely something that is not easy nor comes natural or fast. Though there are some players ages 7-9 that are more natural and get it down.  If it doesn’t come for you early, trust me it will eventually come.

The thing is once you are 11 years old, it’s like something clicks for those who keep practicing.

After age 10-11 it won’t come with age, it will have to come with time practicing.

Also know that there are college players who still struggle with juggling.  It won’t  make you or break you, but it will help your touch and confidence.

Juggling can be frustrating for some personalities

It’s frustrating to not see yourself improve, even if you spend hours doing it.  This is normal.

For those who get discouraged, remember we all improve and peak at different times.  Some players who may be stronger or faster might not get good at juggling.  Then there are those who might be good at juggling at a young age, but will never be fast.

I do believe there are some people who are born to be more technique, but then you have to have the mindset and discipline to reach your potential.

There’s also tons of coaches who don’t care about how many juggles you can get.  Instead know that trapping, passing, movement off the ball are more important.

Other coaches I’ve heard reward playing time to those who can juggle the most.  I understand motivation, but this idea shouldn’t be what determines who starts on game day.

Whatever your personality is, make sure you know it can take time and by looking at the age chart you’ll know how others compare.

Some of the best jugglers and tricksters aren’t game players.  Have you ever seen a player with great skill, but on game day they lose the ball? 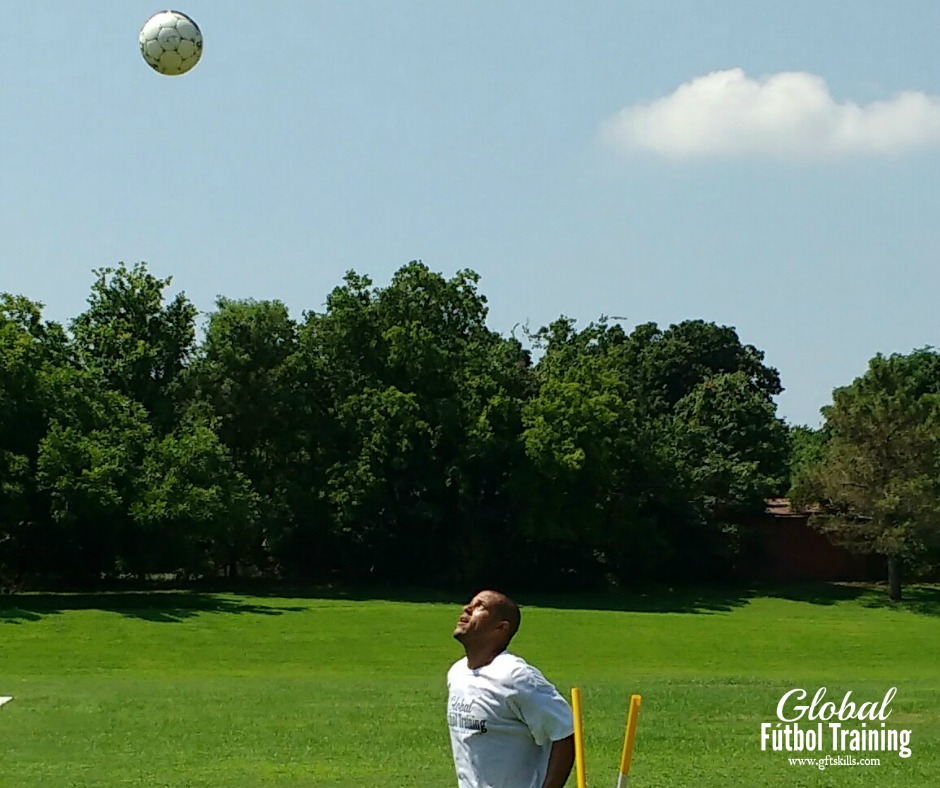 Just because you can juggle a soccer ball doesn’t mean you can play futbol. - Jeremie PietteClick To Tweet

How juggling can add to your value

*Note: There are players who play in top leagues, even college that can’t juggle very well…

Imagine how much better they could be if they can learn to juggle good.

On another note there are many kids who can get 50-200 juggles but they only are able to use their thigh and strong foot. Try to eventually get good at alternating feet every touch.  Coaches will recognize your talent this way.

Let’s say you go to a tryout and before the scrimmage all the players are asked to juggle.  Well during the scrimmage, juggling skills don’t really matter.  But if you can’t juggle in the warm up, you might lose credit points from the coaches who don’t know how you play.  If you can juggle well, they know it doesn’t mean you can play good soccer.

Gain that extra eye from a coach during a juggling warm-up and then with a good scrimmage/game it adds to your value. 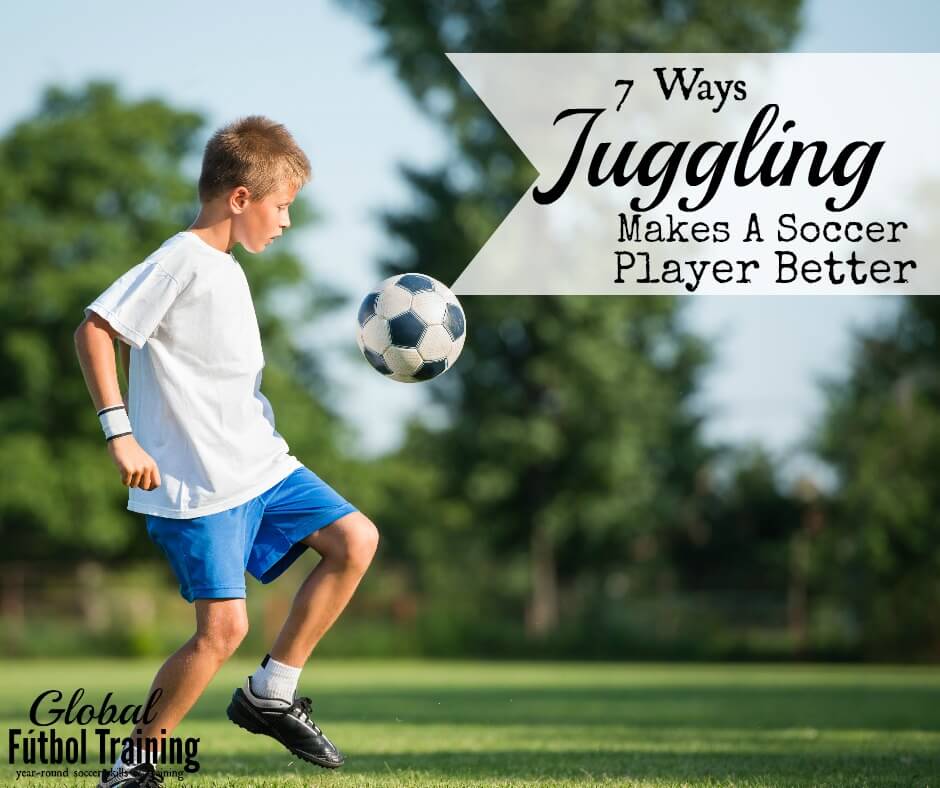 Of course there are more than 4 ways to juggle, but the video below shows 4 good ones you can spend time on.

Most players are only good at one way.  The players who can get a lot of juggles are usually the ones who keep the ball low or the players who use their thigh.

I’m not a fan of tricks because it doesn’t help you near as much as the clean touches.  I can promise you that most pro players can’t do a lot of juggling tricks.  It’s good to practice juggling high and low balls, but don’t worry about being fancy.

There are the low juggles, mid-size and then the higher ones above the head.

The mid-size juggles are the smoother looking ones.

Low juggles will get you more in short amount of time.

Then the higher ones are more difficult.  I promise you it’s more important to be good at all of these, more than just being really good at only one way.

There are many ways juggling makes a soccer player better, but these 4 are good ones for sure.

Example of how juggling helps in a game

A player that has good juggling skills will most likely have a good touch to control the ball.

Player who are not good at juggling will oftentimes have a hard time bringing the same ball down. This is a big part of the game, and if you are patient and work on it the skill will come.  Once it comes you will be a happier soccer player.

If you can get 50 juggles easy and clean using different styles you will have a good touch in a game.  Some players can juggle hundreds of times, but on gameday can’t complete a pass under pressure. 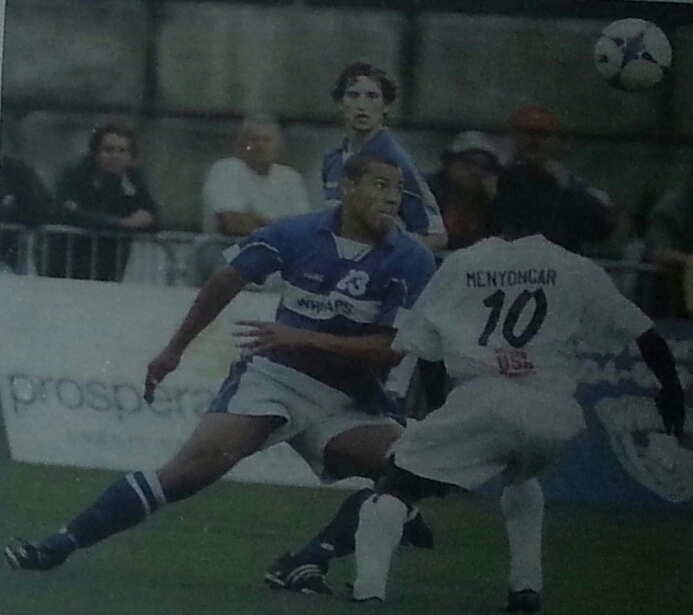 Being patient is key

Juggling a soccer ball is by far one of the hardest skills to get down. It’s a slow process, especially for players under the age of 11 or new players at any age.

Frustration is normal, but the ones who stick with it will get there.

Some of my online lessons/courses in [Advanced] are the perfect solution for learning ways to improve faster and in a less frustrating way.

When you know you’re at least working on the right things it helps.  Then remember juggling can take several years for it to finally click, so keep practicing at home.

Challenge yourself with different ways to juggle

There are so many ways juggling makes a soccer player better.  So instead of only and constantly trying to break your juggling record, add these ways.

Juggle high and low balls using feet only, walking, jogging, back spin, side spin and with no rotation.

Once you can juggle 25 times and time and any day, start to juggle using these many different ways.  Spend your time learning and becoming comfortable with the ball.

My goal is to Raise your level through motivation and training!