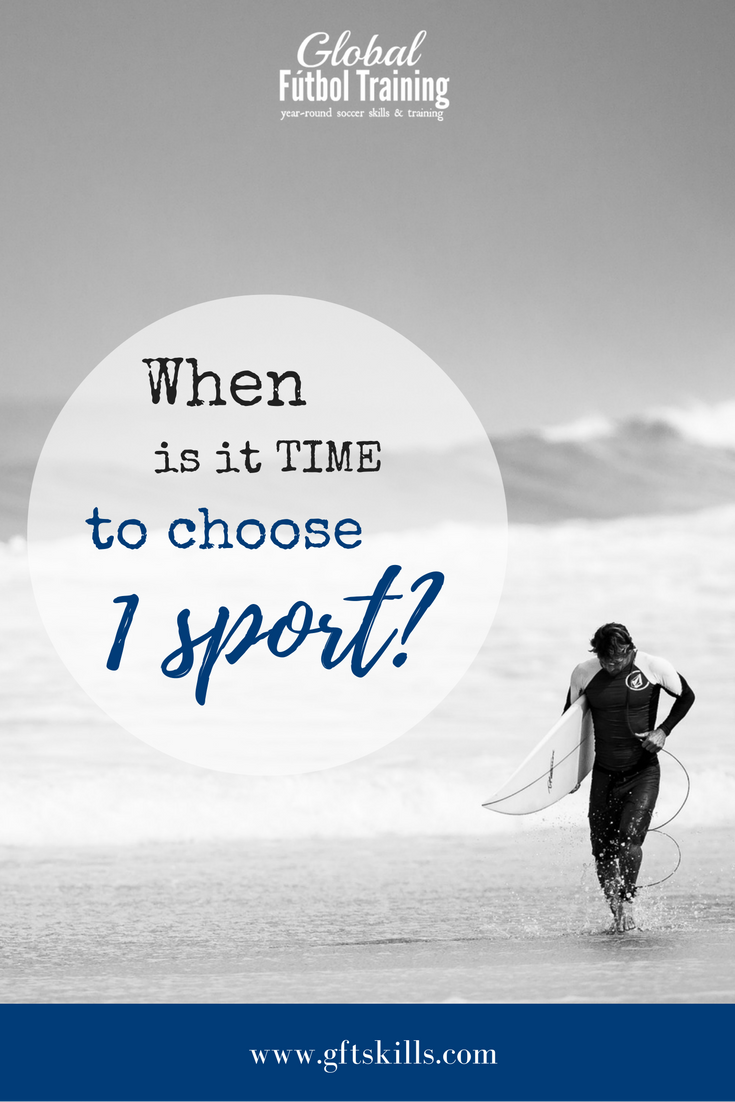 When is it time to choose 1 sport? As you read on you can think of where you guys are and what is best for your family. Soccer players have different seasons in terms of how many games are played in a short amount of time. Or how many practice/training sessions per week/month. Spring is busy because the kids are finishing up their school sports and playing club.   Being a private soccer instructor, I encourage the kids to take a few months off of private lessons.  This way they have rest/recovery time.

Everyone is different in terms of how much they can take, but also it depends on a player’s full family schedule.

Some players only play 1 sport (soccer) but some play 3 or more sports per year. I see that a lot of our players also play basketball, volleyball & track.

Some families are big and have 4 kids who play soccer.  Siblings are often times out at the fields watching each other play instead of resting in the house.  For athletes, being at the house during down time is good for the mind and body.

Determining the time to focus solely on 1 sport, I think, depends on the players’ abilities, passions & goals.

My Story: Growing up in year-round sports, I personally played 3 sports as a youth.

However, in 10th grade I decided to only focus on soccer. This is first because time was important to me and second, my goal was to play in college.

I recognized that I wasn’t good enough to play college basketball and maybe not football.  Thinking I would be too skinny in college (because in high school I was).

Mostly I wanted to give myself the best opportunity to achieve that goal.  So for me it didn’t make sense to keep shedding blood, sweat and tears in football or basketball when I wasn’t even going to play in college.  Soccer needed my attention to achieve goals I had set.

As a teenager I also wanted time to hang out with friends, drive my car, have freedom. 🙂

When the fun is taken out

The main reason I stopped playing football was because the coaches thought they were Army Sergeants or Pro Coaches. 🙁 I love football, but the overkill is not exaggerated… & I’m not being soft. In 10th grade we had at least half of our starters who were also 2 sport athletes quit within one month.

Even for tough athletic kids who don’t mind being pushed, there comes a time when it’s just too much.  When the fun is taken out it’s pointless. (& before you email me, re-read the above sentence – I am not dissing the need for hard work!).

I had 1 of the coaches stop me in the hall & tell me that I needed to play football because soccer wouldn’t take me anywhere. How the best soccer player who just graduated went to some school nobody had heard of…

When this happened I took the challenge to honestly prove this coach wrong! 18 Countries Later and I’m telling a story about this coach. So we have to put ourselves 1st, not the coaches, and as long as you work hard and respect others you will be a team player.

When is it time to choose 1 sport?  You’ll know when your mind or body tells you.

Even for the tough athletes, when the fun is taken out it's pointless.Click To Tweet 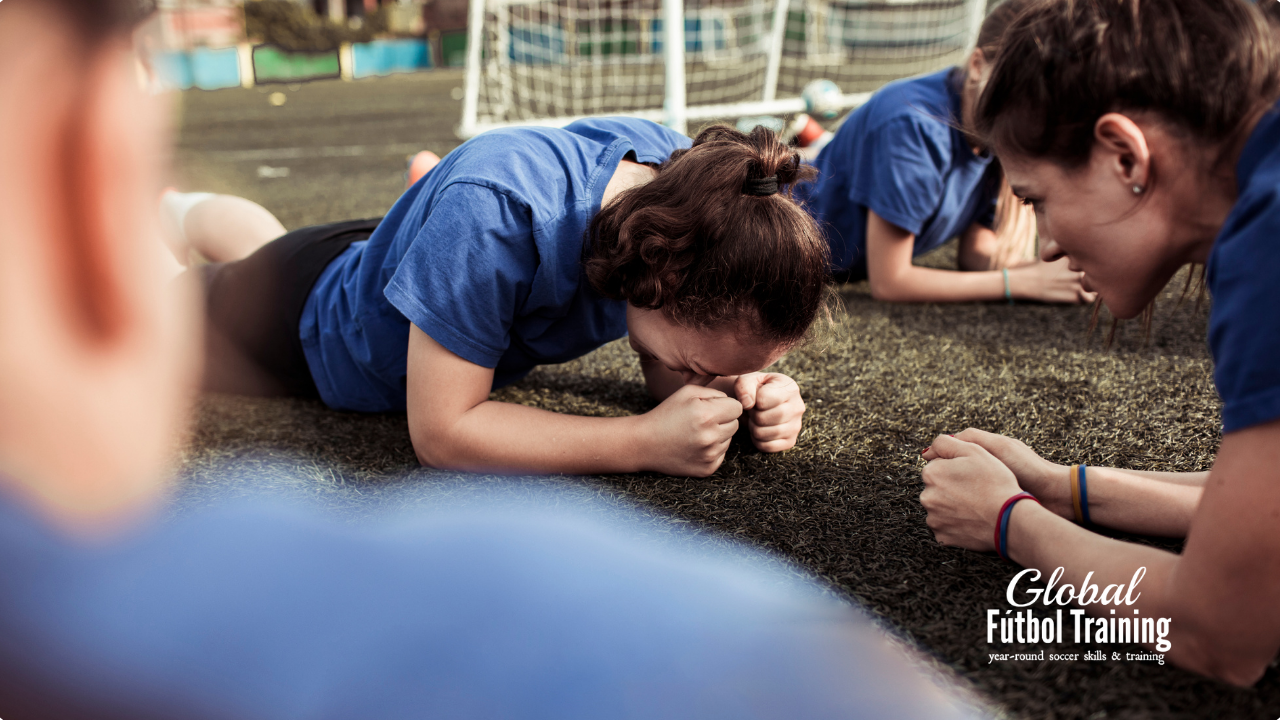 When do you choose 1 sport?

If a youth athlete loves soccer most and it’s their best sport, I would stop playing the others around high school, 9th grade.

Now the athletes are playing way more then when I was younger. You may be thinking the same thing because it was normal to play just 2 times a week and you wouldn’t get left behind.

Nowadays kids can get left behind in sports because of private lessons and more resources that others take advantage of.

The only way a kid age 13+ can make it to the HS varsity or college without taking advantage of the resources is by having HIGH Determination or better athleticism than 90% of their peers.

If you wait until age 14 to get serious about improving it will be very difficult to build the skills, decision making and muscle memory to compete against kids who have been training hard since age 8.

In the last decade plus of operating Global Futbol Training there is one story that will always stick out to me. During my off-season in my last year playing pro I was at my in-laws 2 hours west of DFW when I met Matt.

Matt did something great that proves determination & opportunity are a good mix. He came to the high school to train with me independently & I showed him some training methods that help improve skill.

At the time he was 14 years old and never played organized soccer but he wanted to play college and pro. I told him if he works hard at the skill drills and gets on a select team in DFW, he can play college. Matt organized his friends to have me down for a 1 week camp the first year I started GFT.

A year later he was amazing and could do anything with the ball! His dad got him on a select team in Fort Worth where they had to drive 90 mins one-way for practice. Each season he kept improving his understanding of the game and moving up to better leagues.

He ended up making it to Div 2 Dallas Classic League Team and later made a D3 College in Arkansas. The MAIN REASON this happened was because he had HIGH Determination and had the support from his family to give him resources.

The sport I would be careful with when also playing soccer is track because it is lots of running on ‘beating up the body’ when soccer is already enough running. The part of soccer that is demanding on the body are by far the games! So when you’re playing in 2 leagues all the time and then running track in high school too means you’re beating up the body more and more each season.

In my opinion, all you need is 1 day off. This is a tricky subject because some people think they can just take 1 day off and then overload the kids with something every day.

You can do 6 out of 7 days as long as it’s smart. I don’t think you have to do 6 days a week, I’m just saying it’s not too much if it’s the right training.

2 Things to be careful with

1. Year Round 100% Speed/Strength Training: A soccer player doesn’t need to be doing speed/strength training for 1 hour per week unless it’s a short 2-3 month package. No need to buy 1 Year Fitness Program for a soccer player! It’s a skill game, not strength, and there is already so much running involved you don’t want to overload the body with more muscle burning exercises! So these Fitness companies who try to sell you to buy 1 year programs don’t know anything about soccer. Soccer players don’t train like other sports. There has to be a mix of technical training and fitness training!

2. Playing in multiple Leagues all the time: This is because games are hard on the body, especially hard surface/turf. If it’s the Winter and you want to play indoor or futsal fine, but not in the Spring & Fall. Don’t feel like your child is falling behind! Playing games isn’t going to make your kid better as fast as proper Technical & Mechanical Training.  I have seen players who do other things get injured and not recover, while my trainees who train year round year after year stay healthy.

There are some athletes who do great and are meant to play 2+ sports through high school!

Again, IF a child’s goal is to play college soccer, I wouldn’t keep playing 2 sports after 9th grade. Unless you have the opportunity to choose one of the sports in college and would want to play either of the 2 sports.

‘Best 2 Sport Athletes’ In my opinion Bo Jackson & Deion Sanders are the best example of 2 sport athletes, both of whom played Pro Football and Baseball.

I don’t think there has ever been a pro soccer player who also played another pro sport.

Soccer takes too much training to stay sharp.

American football is more of a be fast & strong and baseball doesn’t hold to many skill elements.

When is it time to choose 1 sport

Make A Checklist to help decide when is the best time to focus on 1 Sport.

You guys have to decide for yourselves because there is not 1 perfect answer. Hopefully this can help you decide. Take this for yourself or ask your kid the following questions:

Today’s youth athletes are putting more hours of training in than any other time in America!

One sport consumes as much time as 2 sports used to, so we want to be careful and communicate with our kids.

Communication between sports parents and kids

What are their goals and passions?

Do they need more time to chill at home and focus on other things?

Are they really wanting to keep putting in more hours of 2+ sports or do these need to choose 1 sport?

Do they know what they want in the future? Some will and some won’t know, but at least you are communicating together. Kids can think about it over time to maybe have an easier decision down the road.

Its okay to play soccer 5-6 times a week, but it has to be the right training.  Not fitness sessions and games all the time.

In Europe (& even FC Dallas Academy) they play every day, but it’s the right training at the right time / age.

So, when is it time to choose 1 sport?  It’s up to you to decide, but think and talk about it as a family.

Let me know your thoughts or if there is any other topics you would like to hear about!