The golden years for soccer players can be different depending on the individuals situations.  In most situations the best years to develop is between the ages of 7-11.  This doesn’t mean that if you train really hard at these ages you’re all set and can stop.  Imagine pro players who just won the championship being told by their coach “hey now that we’re champs, let’s just practice 3 times per week.”  This would never happen because you know that to stay sharp and keep improving, you have to work hard at the right things. 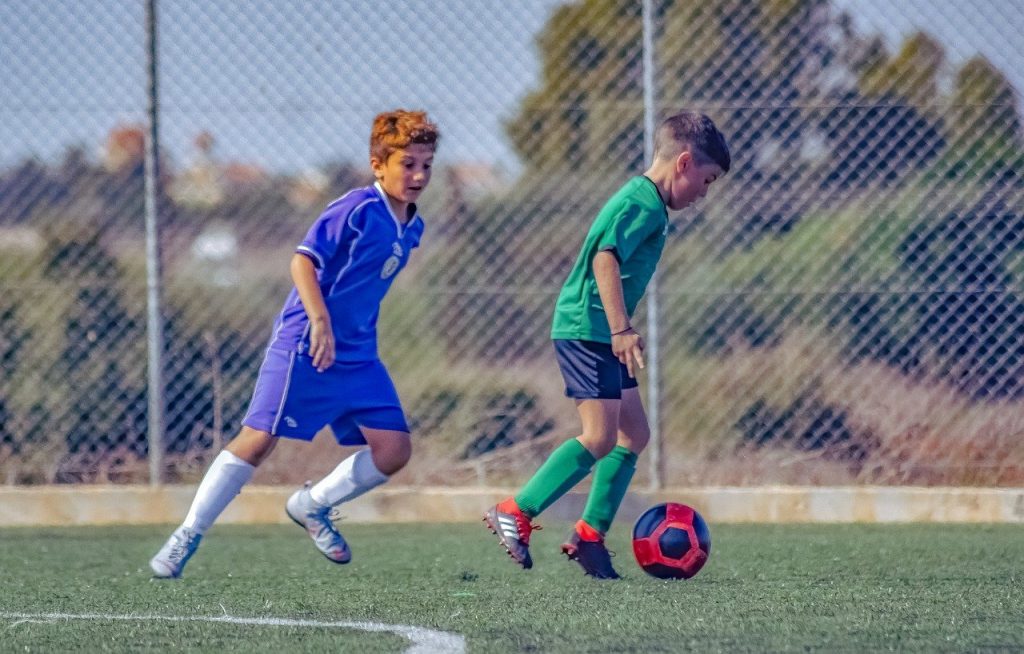 Why the golden years for soccer kids is ages 7-11

Data shows there are 4 million registered youth soccer players in America.  Most of these players are not going to grow up and play college or pro.

To make the high school team nowadays you really need to be good by age 14, especially in big soccer cities.   For 99.9% of people, you can’t just decide to get serious at age 13 and then end up a high school starter 1 year later.  Sure, some people are just naturally fast and talented, but not many.  And of course you can continue improving all the way through high school and even college – pro.

Unfortunately soccer takes a lot of time to become really good.  Fortunately, if you’ll put in the work you will really get ahead of your peers.

Another reason I like kids training in these golden years for soccer is because they are at the age where they can do just about anything you teach.  Most younger players still struggle to get more than the basic fundamentals down.

In terms of private lessons I would start working with a trainer around age 9.  Even if it’s for 8 weeks and then take off 8 weeks.  It all depends on your budget and what the kid wants.

Some kids at this age do privates or small group most of the year.  Other kids practice just as much at the house.  Either way, it’s helpful to do one of the two.

Training only with the team isn’t going to give enough reps, correction and advanced training.

I’ve read and watched how many players who ended up playing pro, spoke about how they didn’t make their teams as teenagers.

So many have stories how they were told they weren’t fast or big enough or good enough.  Why did they end up going from sitting the bench or not making a team at age 16 to playing in the world cup?

One of the best Argentine players of all time, Riquelme says that “when you get older (ages 18+) the technical players always play.”

Other sports athletes like Michael Jordan & Dennis Rodman didn’t even make the high school varsity team…  So for those of you struggling with goals, don’t give up!

Does playing soccer at ages 4-6 help?

Some would argue that the best players in the world all grew up playing at a very young age.  Well, let’s not compare our kids to Messi and Ronaldo.

If you have the time, sure play.  It can help them get used to playing, but I wouldn’t sign up just to get ahead.

I’ve seen players at age 10 who played rec soccer and had no skill who ended up playing college soccer.  The reason is because they were serious and did private/semi-private lesson from age 10-13 and kept working hard from then on.

I think more important than playing in a soccer league is playing with the soccer ball at home.

Get young players used to dribbling at the house. Even if it’s just dribbling the ball from the bedroom to the living room a few times a day.

This way when they do play on a team and possibly get a coach who doesn’t have experience the player can at least know how to control the ball.  In this case they can still be successful and enjoy it more. 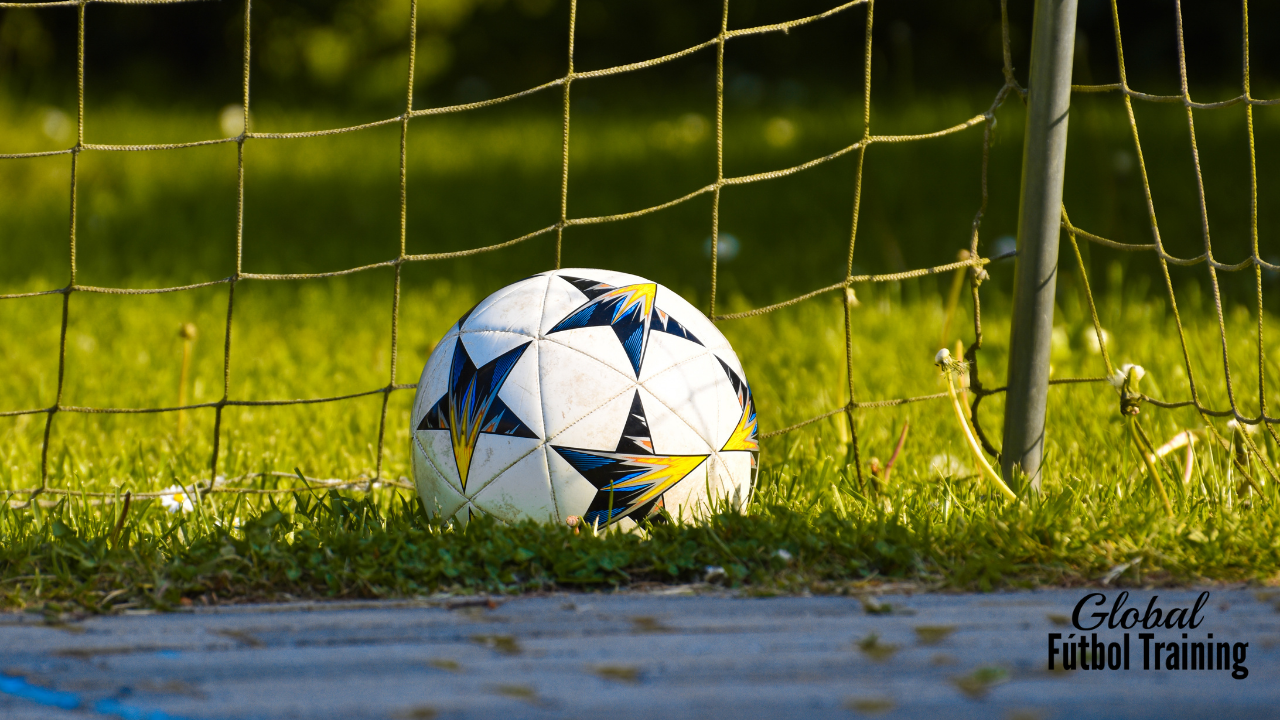 The best way to practice at home

Get a ball and practice dribbling around the house or in the backyard.  If you are the type who will do this, I recommend you get my online courses.

Three levels to choose from you get all of them by getting the bundle.  Just 20-30 minutes a week will do it.

Within 3 months you’re game will be changed.  Once you complete all the lessons continue doing them.

Have the mindset of always wanting to improve.

Too many kids think that if they can do something it’s good enough.  No, it’s not.  Even the pros continue working on their craft.

The other best way to practice on your own is by kicking the ball against the wall.  Here’s a blog post I wrote to give you training drill ideas. It’s very important to do these because you’ll improve your passing, shooting and first touch.

You need more than the golden years for soccer

Some people read or hear how the golden years for soccer is ages 7-11 and think that’s it and you’re all set.  True, it is the most important time for most players, but it doesn’t mean stop putting in extra work after age 11.

The best players I have trained had the love to want to keep training because they knew it would help them and they just enjoy training.  That’s different from the players who don’t like to train outside of team practice.

I understand that everyone can’t afford private individual or small group training which is why I love helping you know how to train on your own.

Training on your own is key, and the more you do it the better you get.

Learn 3 secrets to a harder shot

In the video below you can learn the importance of form/mechanics when kicking with your laces/top of foot.

Of course as you get older (age 13-17+) there will be the days you just don’t want to train, but these are the most important day.

The days when it’s super hot or cold or when you’re dealing with minor pain or just don’t feel the energy are the most important days to put in work.

Everyone plays when the weather is great, but those with grit and sports maturity understand that everyday isn’t going to be fun.  They know that the days add up and you’ll continue to improve. 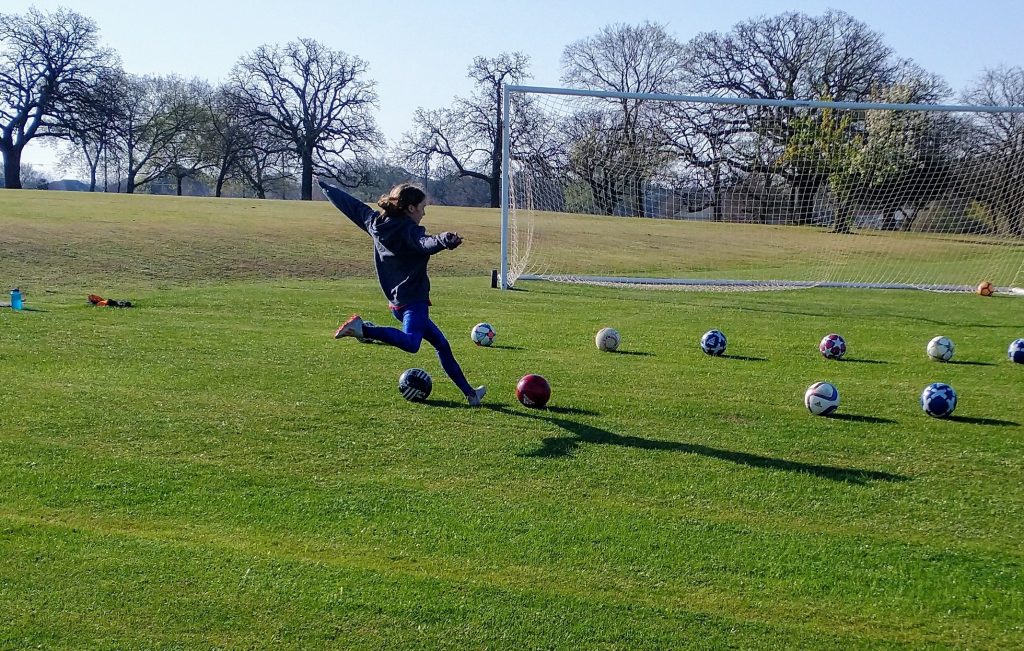