Everyone knows that eating healthy is important. Not many know the best times to eat and what to eat. When I first started GFT I would pass out a laminated sheet that parents and players absolutely loved! These soccer player eating tips before and after games are exciting and encouraged health. Some of my clients have kept that laminated sheet on their refrigerator for 9 years.  Pro coaches organize meal planning for the team, but amatures should do the same.

The timing of your eating is important

Whether I was in North America, South America, W.I., Europe or Asia there were common foods we would eat.

What stuck out to me most was the timing of when we would eat.

I am sharing all of this with you today! 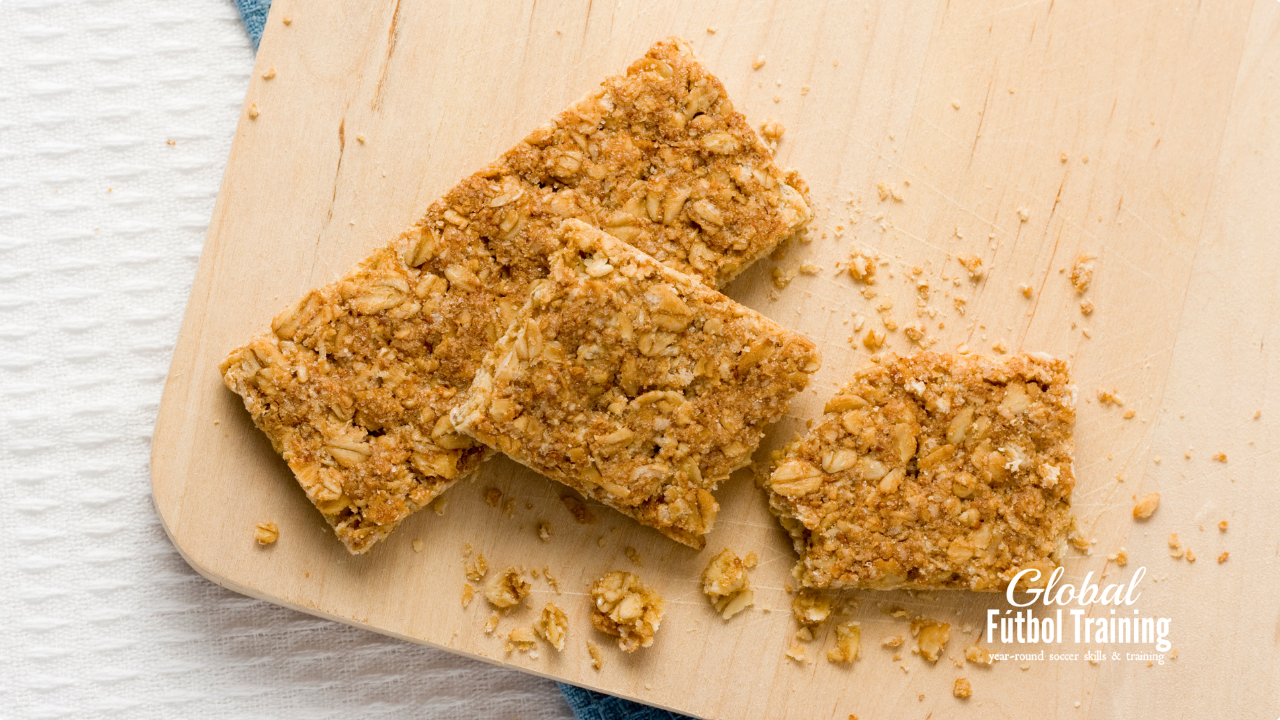 When I played pro soccer we usually would be given a granola bar or banana for pregame snack, 2.5 hours before the game.

The thing is you want to be careful eating fruit that close to a game, because it could run through you too fast.

Eating some fruits can result in you being in the bathroom during pre-game warm-up.

Keep it simple and find what works best for you.

Sports drink is a good thing to intake during the Summer, but make sure you are drinking mostly water. 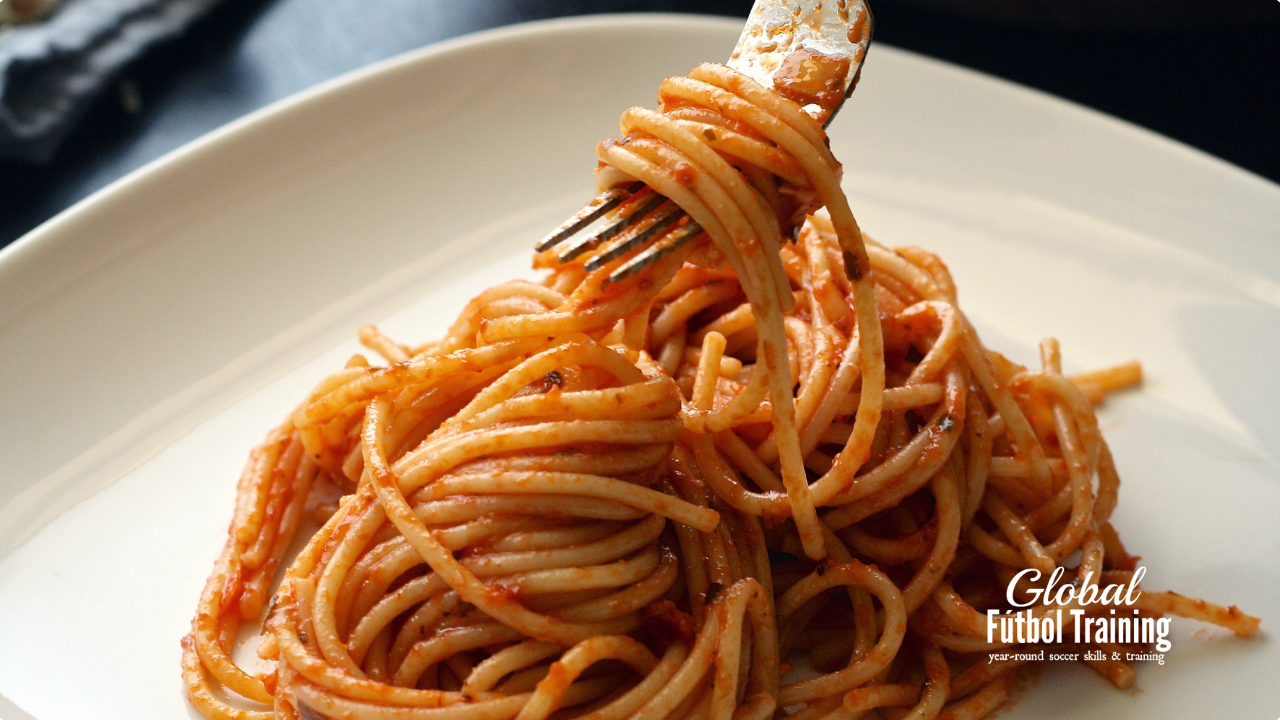 There is what we call a pre-game meal and then there is a pre-game snack.

The meal for college or pro is 5 hours before the game starts.  High school could do 4 hours.

You might read that some people recommend eating 30 mins before a workout, but just know that these people did not play pro soccer. I don’t recommend you eat 30 mins before you play or workout.

When I played at the pro level, the meal consisted of:

One of my coaches had cookies for us if we wanted, but we could only have 2. I liked that coach for that!

Whenever a whole teams knows these soccer player eating tips before and after games it helps with performance.

What soccer players eat for breakfast

For breakfast you can eat:

I just wouldn’t eat much fruit, especially if you are just trying to find out what works best for you.

Like I said just a minute ago, fruit can go through you so fast, which could have you on the toilet instead of the field.  It’s fine to eat, just not too close to kickoff. Let there be at least a 2 hour gap.

Again, take this info and find what is best for your body.

What to intake during the match

Water, sports drink are really the only things you should be putting in your body during a game.

If you are having cramps you can eat banana.

Matter of fact, when you see the pro games that go into extra time some of them are eating banana or protein bars. When this happens you don’t see many of the players doing this, just the ones who are concerned they will get muscle cramps.

Also please know that you should hydrate 1–2 days before the match. Waiting till the day of the game is too late and no matter what or how much you drink it might be too late.

After you play a game or practice you should try to intake carbs within 30 minutes of playing.

I never was hungry right after a game and know that many athletes feel the same way.

If you’re not hungry 30 -35 minutes after playing, then you need to take at least 1 bite of something.

Even sports drinks will do in this case. Sports drinks have carbs that help refuel your body.

Really nobody needs a ton of sports drinks due to all the sugar.

For the younger athletes or older, you can think about getting Pedialyte or something like that. It doesn’t taste as good, but the purpose is to take care of our body not our taste buds.

This all depends on if you have 1 game or more. If you have another game then you want to think about how you can recover quick and refuel.

Chocolate milk is great for recovery when you need to perform again later that day.

There have been several studies of cyclist where half of them drink chocolate milk after their morning race. Later in the evening 5-6 hours later the ones who drank chocolate milk performed better than the half that didn’t drink it.

The mix of chocolate and milk help you recover and give you antioxidants.

If you don’t have another game, then recovery doesn’t matter AS much.

Either way you need to eat on time and something healthy. 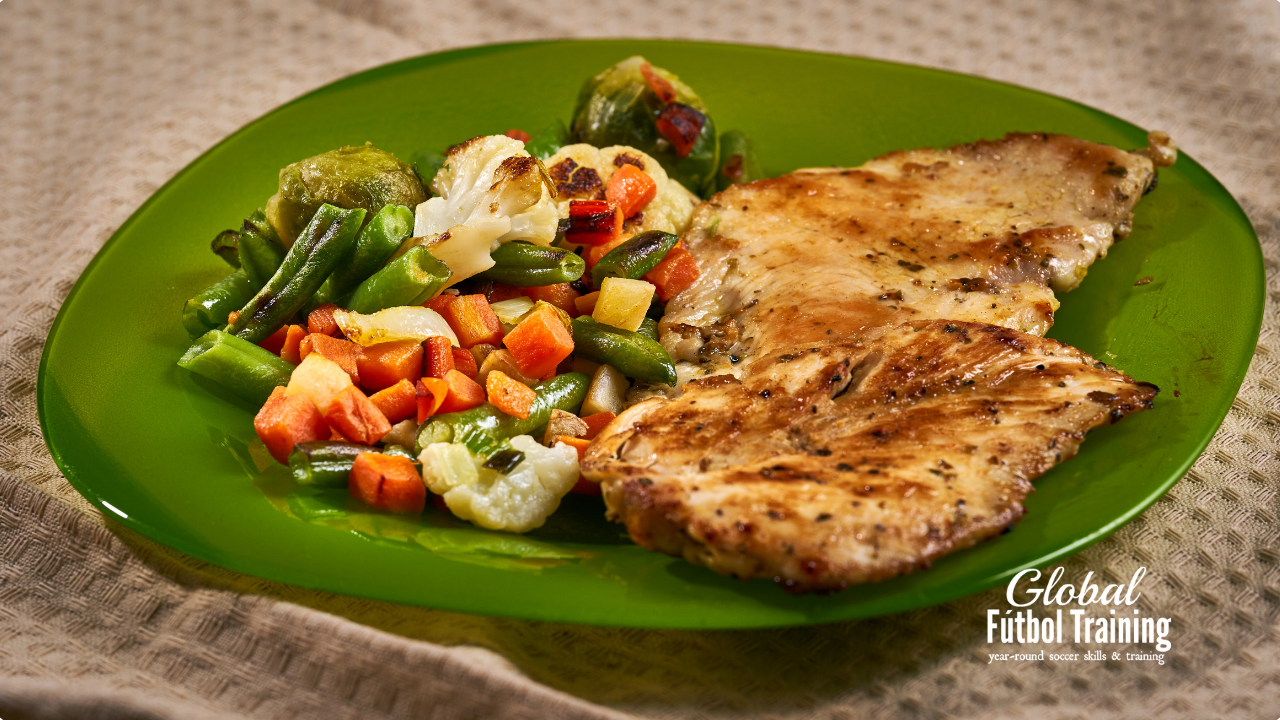 These healthy foods help the muscles recover from of your hard workouts.

Feel free to get a hamburger every now and then. Just know that your body will not recover as fast as chicken or these foods below.

If you have an important game, I suggest you keep it as healthy as possible.

These food choices and tips will help you perform better for sure.

Don’t forget to tell your friends these soccer player eating tips before and after games.  The more of you eating good the better your team will play.

Pack these healthy snacks in a cooler

Not all of these have to stay cold, but in some cases during the Summer you don’t want any of these foods to get too hot and spoil.

Not only will you be eating healthy, but you will be eating on time and saving money.

This is a great idea for larger families or even a team that wants to take turns bringing post game foods.

If you have a tournament you can all meet under a tree or even go to a mall and grub on your packed meals.

Foods for the cooler/ice chest

I would plan on eating a small snack 20 – 30 mins after you play [at least 1 bite] and then shortly after get you a good meal.

Grilled chicken is the best in my opinion, but you can also eat turkey.

The thing about turkey is it could make you tired after [maybe not – see what’s best for you].

If you don’t have to play again later that day don’t worry about eating turkey, but if you do play I would stick with chicken.

Get you some veggies to go along with it because the vitamins will help your body recover faster.

Hydration during all seasons

Depending on what part of the world you live in and how old you are depends on how much you should hydrate and with what.

If you live in the hotter climates like the southern United States, most of South America, Africa, Southeast Asia you will need to drink extra fluids.

The thing about sports drink is you don’t want to drink too much. Especially younger kids under 12 years old. If it is really hot and you have multiple games or it’s a Summer camp then drink 8-12 oz. There is no need to drink more than that.

Water is what you need most.

During these hot seasons, make sure you start hydrating 24–36 hours before your game or camp.

There are too many people wait till game time or right before. If you wait this long to start hydrating on a long hot day, it’s too late.

So again, stay at least a day ahead when hydrating.  I highly recommend you drink an extra big cup of water 2 hours before playing.  But again, start hydrating extra 24 – 36 hours before kickoff.

Getting dehydrated in the Winter season

In the Winter is a time where people also get dehydrated.

We don’t sweat near as much, so therefore we don’t crave water.

It’s not like you have to drink as much as you do in the Summer, but you do want to remind yourself to drink water during the day at home, work and school.

They say that the average person who doesn’t work out should drink eight, 8 ounce bottles/cups of water.

Athletes should be drinking twice this amount, especially older players.

If you start to feel a headache or have dry mouth, these could be signs that you are dehydrated.

In some parts of the world, it will be 30 degrees one day and then in the 60’s or 70’s the next day.  Those hot days come along and then it’s too late to get hydrated.

Coaches need to stay hydrated too

Last, is I want to encourage not only the players, but also the coaches and parents to stay hydrated.

I can tell you that I have been dehydrated several times. It happens because we all get busy and literally some days don’t have time.

Last year my wife got me one of those big water jugs that all the youth players have. It was a good move by her for getting it for me. It made me realize how much water I was not drinking, because I drink the whole thing easy.

How I over hydrated drinking too much water

It was the first game of the season, when I played against my old club Vancouver Whitecaps…

I was playing with Toronto, where we flew to the west to play the Portland Timbers and Vancouver Whitecaps.

I wanted to do so well against my old club, that I tried something that I had never done.

Drinking a whole gallon of water while in the air flying across North America.

I ended up flushing the sodium out of my body which caused me to cramp up early in the 2nd half.

Never before had I cramped in my thighs before, but this 1 gallon of water in a short amount of time did it.

Soccer player eating tips before and after games

It’s so important to know these soccer player eating tips before and after games.

One reason some athletes get injuries, is because they are not eating the right foods.

Being a soccer player requires lots of running and physical fitness.

Make sure you are preventing some of these common soccer injuries by eating healthy foods that help fuel your body.

Muscle injuries can happen if you’re not feeding them what they crave and want.

Tracking the food you eat and how you play

Not everyone’s the same, so you can experiment in terms of what you eat for pre-game snack.

Maybe you take a season tracking your performance and how you felt and played.

Nothing fancy, just get a piece of paper or notebook and write down what you ate, how you played and how you felt. You could feel bad, but play good.

So adapt it to how you want and maybe this really helps you in your future season.