There are thousands of soccer drills to practice for youth and adults, it’s just some are better than others.  Then of the good ones, game like ‘opposed’ soccer drills are different from ‘unopposed’ passing or dribbling drills.  In this post I share how players will improve in game like opposed situations going 1v1, 2v1 and 2v2.  Meaning 1 player vs 1 player or 2 attacking players vs 1 defender.  It’s the opposite from doing unopposed skill drills.  Players need both, because in a real soccer game there are 1v1, 2v1’s and 2v2’s all over the field/pitch.  Check out the videos below and text below to learn and adapt your own soccer practices. 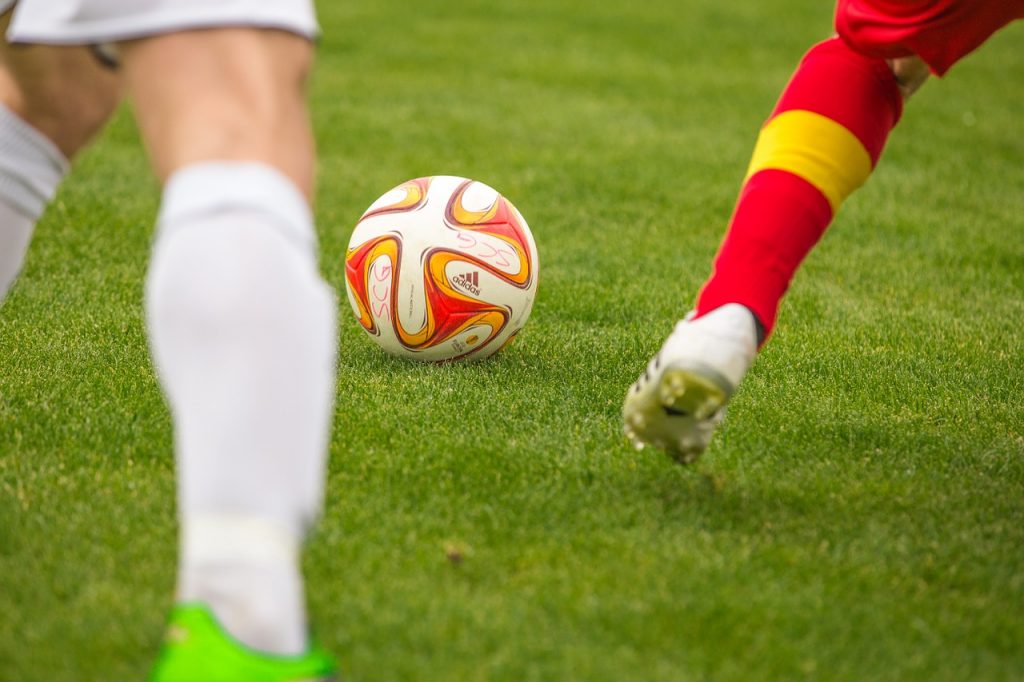 Reasons 2v1 and 2v2 are more difficult from 1v1

1v1 you have one thing on your mind – dribble.  Whereas 2v1’s or 2v2’s you have to think way more.  Example:  Do I dribble, pass and if I pass, when and where?  These things stress the players out.  Not an unhealthy stress, but a sports stress.  I call it sports anxiety.  It’s just where the heart rate goes up, nerves go up and players don’t know what to do.

Once players get used to being put in these situations they become confident and don’t worry.  Though there will be times during tryouts or certain games they feel the stress.  Usually the stress comes from the pressure from coaches and all the parents screaming on the sidelines. 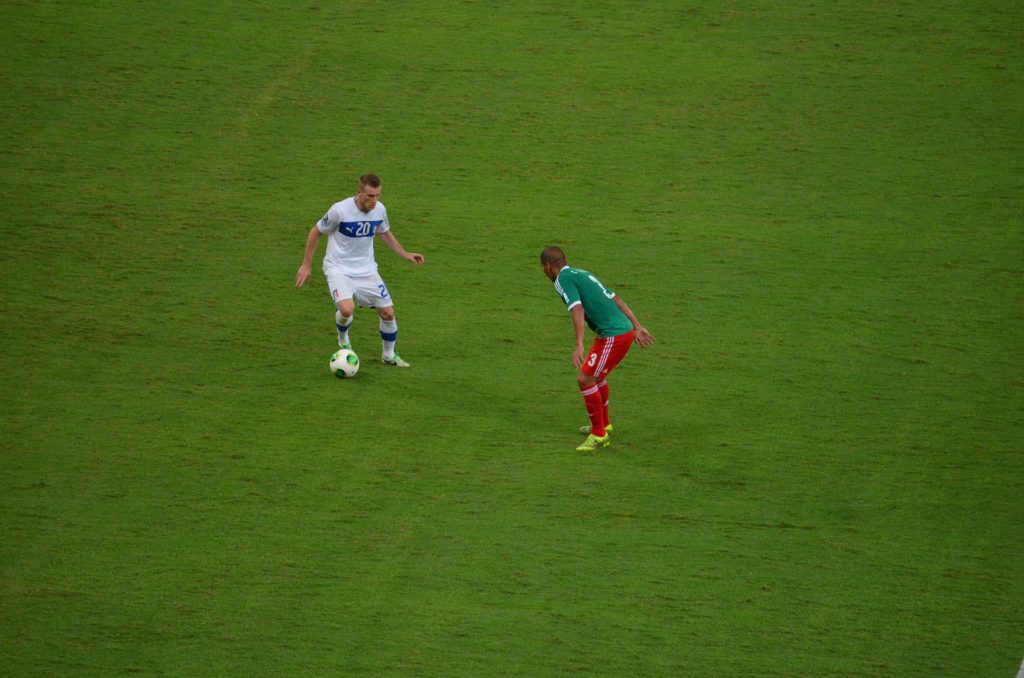 1v1’s are great for all ages, from 5 year olds up to high school.  It’s all about the pressure the players feel from the defender and the quick reactions they have to make. Not only do you have to evade the defender, but also keep from going out of bounds.  To get really good ball control get my online courses – 3 levels.

This 1v1 soccer drill below has 3 targets to score, which are soccer balls set on top of a cone.  The attacking player tries to knock of 1 or all 3 balls.  You can either pass the ball to knock the target-ball off the cone or you can dribble up close and knock it off with the ball you’re dribbling with.  Once the ball you’re dribbling with goes out of the grid the set is over.  It’s great for changing direction and speed.

1v1’s are tiring, so having a small group or 2-3 small groups side by side is good.  This allows players to rest and be ready to go again.  Coaches points can be given to both the defender and attacker in this drill.  Players love it!

1) The “wall pass” 2v1 drill is where one attacker receives the ball with a defender coming at them.  One one side there is another attacker who is the “wall”.  Once the first attacker receives the ball they need to then pass to the second attacker and then get the ball back.   The coaching point and challenge is WHEN to pass.  You don’t want to pass too early or too late. It takes practice and after a few weeks or months the players show big improvement.

2) Give and go with the 2nd attacker behind the defender.  I really like this one because most players only learn the “wall pass” give and go.  Both are great, but it’s best if the players learn it all.   Video below helps show what I mean about the 2nd attacker being behind the defender.  I know in a real game this would be off-sides, but this is more something the players would do in the midfield.  It could also be done in front of goal, where another defender would be behind the 2nd attacker.  Personally I don’t use the 2nd defender here so that the attackers can have more success.

With 2v2’s you can do many different games/drills.  Here are 3 good ones below.

1) Scrimmage/street soccer style is one way, using pug-goals or end zones to score.  Using endzones the object is for a players to dribble or receive the ball in the zone and simply stop the ball for a ‘goal’.

2) Original drill where two defenders start at the goal (one on each post).  One defender hits a long pass to one of the two attacking players (20-40 yards) away.  Immediately the two defenders sprint out to put pressure on the ball.  This could be done in a big space or small space, goal or no goal.  Coaches get the opportunity to teach defenders how to step and cover.  Also teaches the defenders to play more zonal defense not running across each other.  Communication is a big part of it.

3) Player running lateral off the ball where the player with the ball can find the space or feet.  You can pass the ball between the defenders, over the head or around the defender closest to the space the second attacker is running.  Video below.

1v1 soccer drills are great for all ages.  Again, there’s not much thinking involved with 1v1’s.  The player knows they have to dribble and get past the defender.

2v1’s can be used for any age, but I find that really good 9 year old players struggle to be successful in this situation.  I think ages 9 and under should spend more time working on technical skills, like short passing and dribbling.   Age 9-10 is  a great time to get players doing more 2v1 situations.  If they are very strong technically at this age, there needs to be a time where they are put under pressure.  This will help them solve the pressure situation problem, teaching them to know WHEN and WHERE to pass. 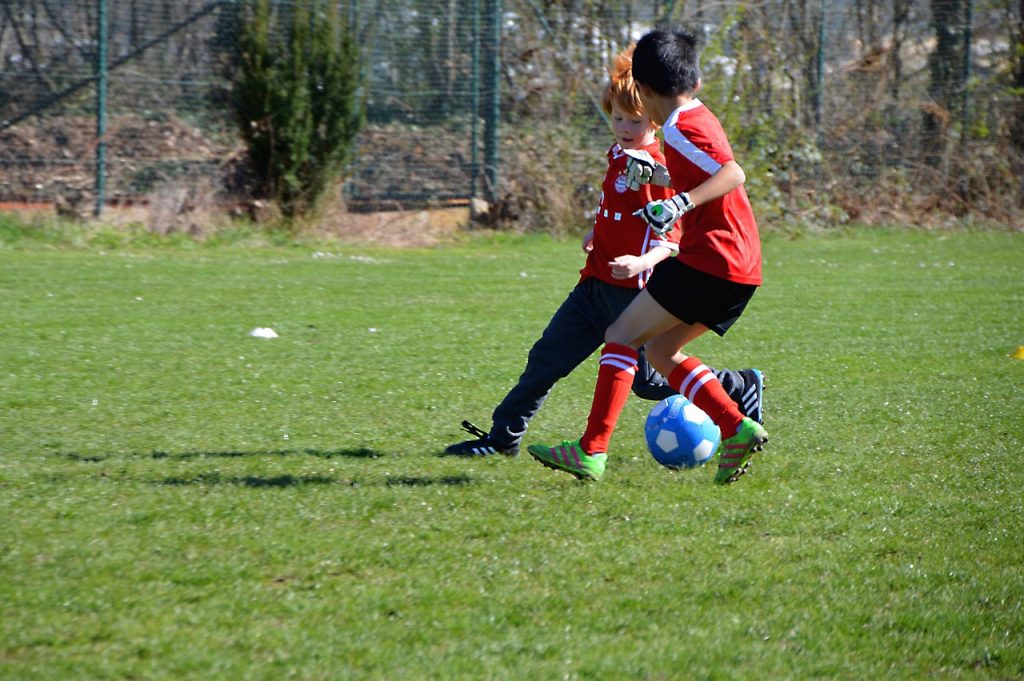 One main element to a soccer player having comfort on the ball is being able to deal with the pressure.  Read this blog post explaining comfort on the ball.  This will come with playing games, scrimmage, 1v1’s, 2v1, 2v2’s.  The main difference from pressure to non-pressure is your feeling are involved.  You can be used to dealing with pressure and solve problems, but to reach full potential you need good form and skill too.   On the contrary, some players have good skill, but freak out under pressure.

How to have great ball control in soccer

At the end of the day – players need to be good at both opposed and unopposed soccer training.  To become really good with the ball you need to practice the right stuff.  Build ball skills into the muscle memory.  It doesn’t take 1,000 touches, it just takes the right touches and the right mindset.  My online ball control courses teach this.