Most players have their own style of play when it comes to soccer or even basketball. You have certain players who love to play simple, and then you have other players who want to play wild. I would say that my style growing up as a youth athlete, was playing physical. Then once I started to develop more skills around age 16 or so, I wanted to have that smooth style. I think the best thing you can do is be you and work hard. It’s okay to take certain qualities from other players, but as long as you have skills training that works you will make coaches happy. The other things will come in to play if you just let the game come to you, meaning don’t force a certain way. Note: This post contains some affiliate links for your convenience. Click here to read my full disclosure policy.

Be diverse in your soccer style of play

Most players are easy to read, so when you have a player to mark up take note early on in the game. Usually players are going to play really simple, or they are going to try and play fancy like Neymar or Ronaldo. This means they will either get the ball and get rid of it, or they will want to hold on to it and dribble most times.

Either way if you do this every time then it’s easier to defend you. If I know you are going to pass the ball quick every time I can adjust.

If you like to dribble a lot then I will start to mark you tighter before you get the ball. But, if you do both it makes me have to think more and worry. It’s so much harder to mark players who show they can play both styles. 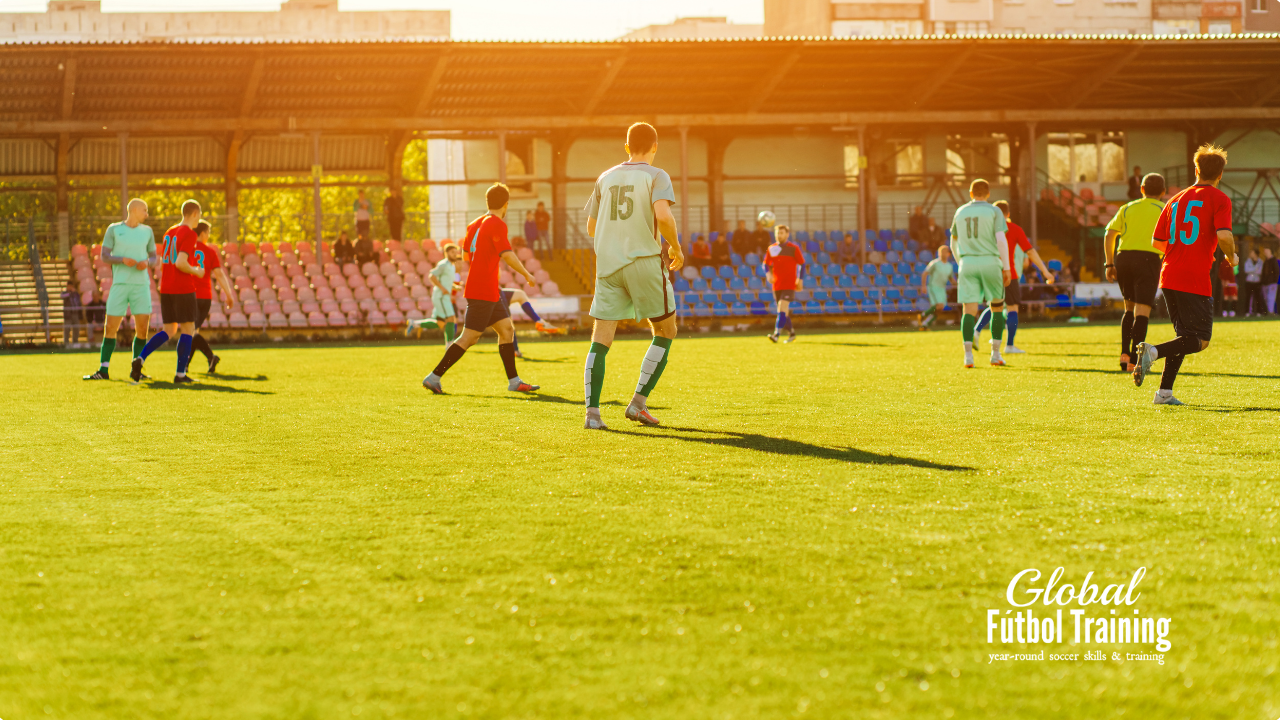 Think about players like Sergio Busquets on Barcelona & Spain or Tony Kroos on Real Madrid & Germany. If these guys take more than 2 or 3 touches on the ball I’m in shock.

I remember watching a game where Busquets had to take like 4 touches and I started yelling across the house to my wife “Hey this guy just took more than 2 touches, I’ve never seen him do that!” My wife was probably saying to herself  “who cares” LOL.

All I am saying is play simple most of the time. Try to get yourself in position early and receive the ball so that you can then pass facing the same way. You can still make no look passes to the side, but having to turn is not what players like Tony Kroos do.

Playing the dribbling style of play in soccer

The unfortunate thing is there are really good players, not getting scouted because coaches hate when players love to dribble. Yes, there are some really great players who dribble all the time and do it well.

Besides these 5-10 players that you can think of, who else in the whole world can play like this? I remember having a tryout in the Danish Superliga and remember doing a flick between my legs. Right then I heard the coach make a noise of displeasure. So what I am saying is, if you want to keep improving and moving up then play simple. Even better don’t lose the ball.

If you never lose the ball you can do whatever you want.

If you are going to dribble you better make things happen. What I mean by this is don’t lose the ball and make your passes count.

I know when you play with someone who doesn’t pass enough it’s frustrating. I stopped working as hard to get open when certain players who love to dribble would get the ball.

The reason is because you work hard to get open, but then you don’t get the ball time after time it drains you as a player. You know what I’m talking about. You’re probably already thinking about certain players you play with or have played with in the past.

Be unpredictable by using different styles in soccer

In soccer / football you want to mostly play simple with 1-3 touches so that the speed of play is fast. But if you only play like this then it’s easy to mark/guard you.

If you can let the defenders on the other team know that you will go at them, it makes it harder for them. It stresses them out to know that you have the ability and confidence to beat them 1 on 1.

Then the fact that you also can play quick, makes you unpredictable. 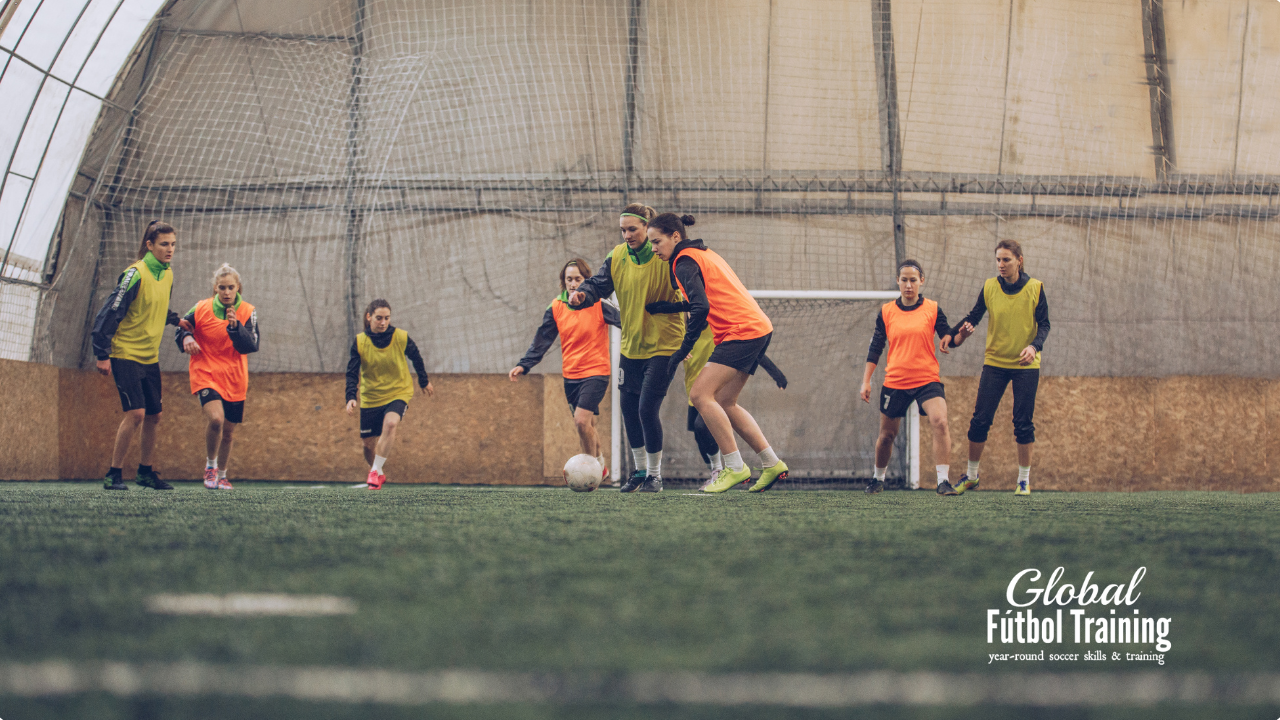 A good first touch is the key in soccer

First touch will come if you continue working on it. Passing the ball against a rebounder or wall will help fast because you are getting so many more reps.

Getting better doesn’t come with age, it comes with proper training. Work on trapping with the inside of the foot as well as the outside and sole.

Also you need to work on first touch stationary, moving side to side, backwards, forwards, jumping, running at speed.  In addition there is trapping balls coming at you in the air. Balls out of the air are more difficult because most players get few reps practicing aerial control.

If you want to know 100% the 5 best ways to improve your first touch out of the air get my courses. This course also comes with moves and methods that will improve your skill with the ball at your feet.

The common style of play

There is a common style of play for youths – high school is just getting rid of the ball.

So many players panic and don’t want to lose the ball, so instead of trying to keep possession they just “kick” it. This is not only for youth soccer.

If you watch the college soccer games on TV you will see the top 20 teams can’t even get 4 passes in a row very often. This is very disappointing for good players to play like this.  It’s usually because there are a few players who panic and ruin the flow for the team.

This is another story though, how D1 college soccer has too many good athletes, not enough good soccer players. Meaning they get the big fast kids, who didn’t work enough on their game outside of club soccer. But since they played top league growing up across America that was good enough for them.

Good news is some of your competition won’t work as hard as you! 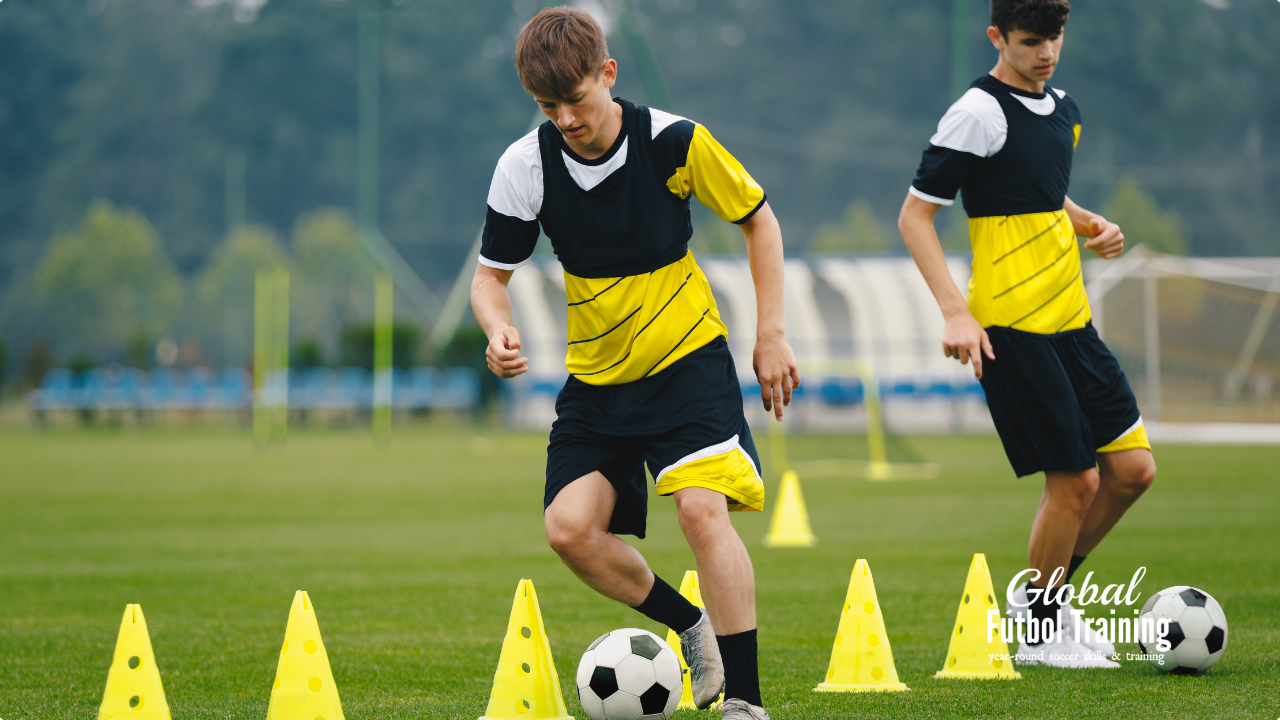